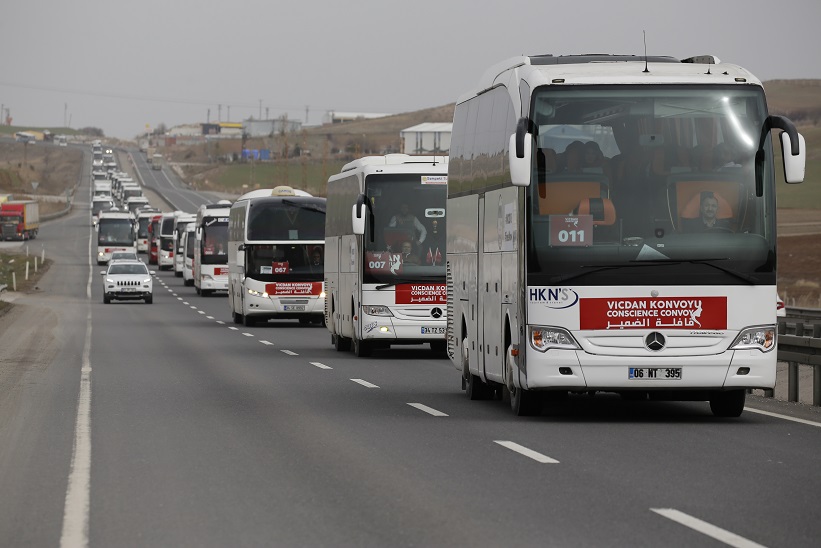 At first it was the goal and the call that took shape. At the behest of Turkish women and with support from former female Syrian detainees, a civil initiative called the Convoy of Conscience came into being. The call reached women from all around the world. Letters inviting women to participate and to give their support were sent out and met a huge deal of interest. The first and fastest reply came from the women of Bosnia. These women, principally the Mothers of Srebrenica, organized themselves quickly into a convoy of four buses and traveled by land from Bosnia to Istanbul. Our letters began attracting responses from all around the world. At an extraordinary speed, the Convoy of Conscience became an international civil initiative of women’s solidarity. In a very short time, all arrangements for the Convoy of Conscience, ranging from organizing buses to media and communication, from accommodation arrangements to planning of the route were coordinated by commissions made up of women.

Once the preparations were nearly complete, the Convoy of Conscience was announced to the world at a press conference held on March 1, 2018. It achieved a high level of visibility covered in local and international media outlets. The testimonies of Syrian women who participated in the press conference had a particularly significant impact. 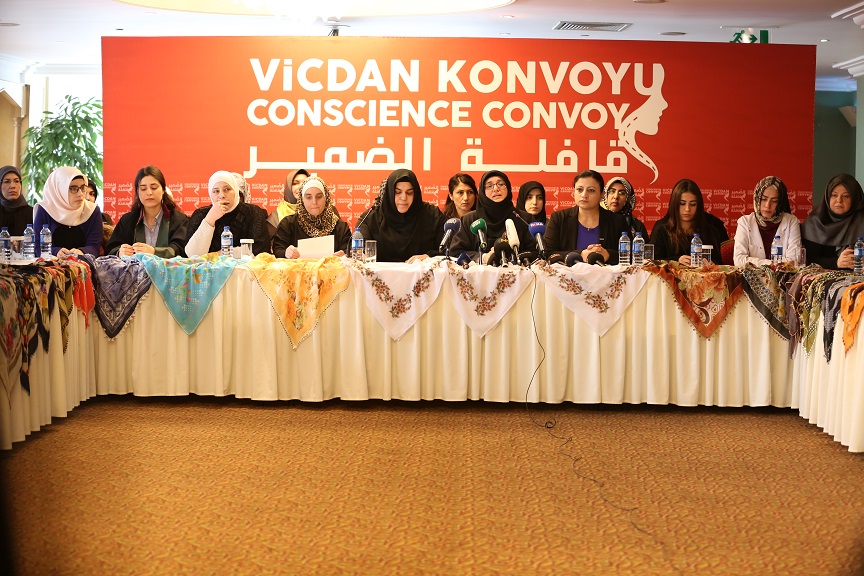 Our first stop was the city of Kocaeli, where we stopped at Kocaeli Intertex Fair and Exhibition Center and were joined by buses carrying women from Kocaeli, Yalova, and the surrounding areas. After a press release and activities, the convoy started its journey to Sakarya. The participants of the convoy gathered at Sakarya’s Atatürk Sports Complex and organized an event comprising a number of speeches. Syrian women expressed their gratitude to all international participants. Many participants took to the floor during the event, which was attended solely by women and hold speeches on the protection of women and girls in conflicts. 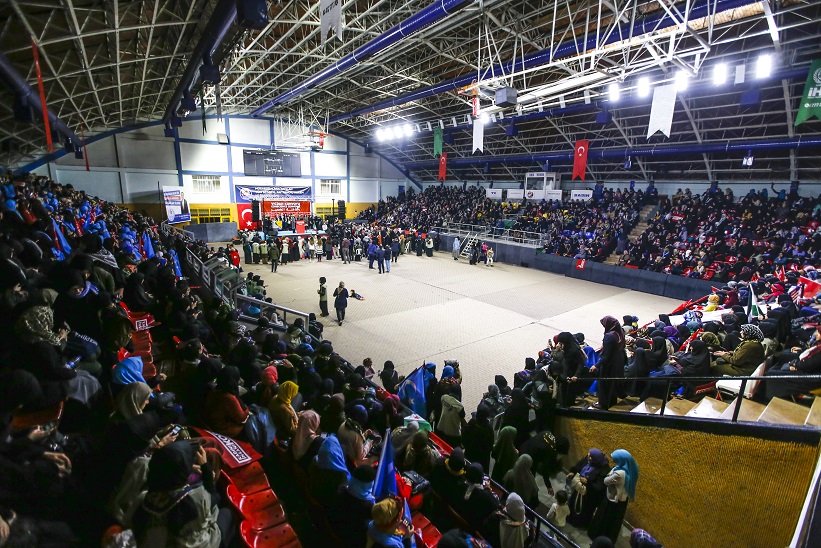 On the night of March 6, 2018, the Convoy of Conscience departed from Sakarya for Ankara, where it arrived with the women who had joined along the way. Hosted and supported by the Presidency of Religious Affairs, the women spent the night at Ankara’s Ahmet Hamdi Akseki Mosque, and left Ankara on the morning of March 7, 2018 after a press conference was held with all the women who had joined from Ankara and its surroundings. 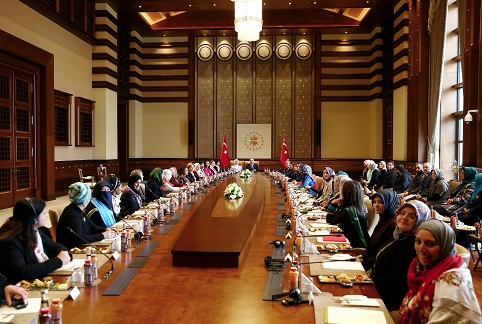 Seizing the opportunity of a wide international women representation, a delegation of the Conscience Convoy representing all 55 countries, met Recep Tayyip Erdoğan, President of the Republic of Turkey, and the Turkish first lady, Mrs. Emine Erdoğan, who generously hosted them.  Majd Chourbaji, a former detainee who was tortured in a Syrian prison, recounted her experiences, and other participants expressed both their gratitude to the President of the Republic of Turkey for hosting them and their wish that the suffering of the women imprisoned in Syria would soon come to an end. After President Recep Tayyip Erdoğan expressed his support for the Convoy of Conscience, Mrs. Emine Erdoğan underlined her support and entrusted a scarf to be taken to Syrian women in Hatay province. The meeting then came to an end with the expression of shared wishes for the liberation and protection of Syrian women. The delegation from the Convoy of Conscience also visited the Grand National Assembly of Turkey in Ankara and organized a press conference in association with the Assembly’s Committee on Human Rights Inquiry, where statements calling for the liberation of Syrian women were made. 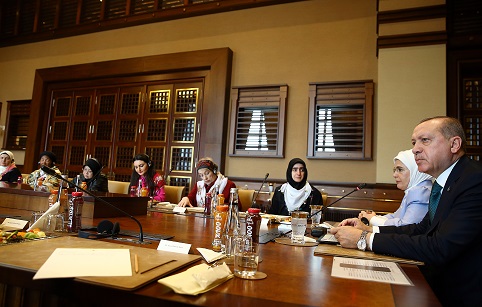 The Convoy of Conscience then moved on to Aksaray, where a press conference was organized with the participation of numerous women from Aksaray. It arrived in Adana at 6pm on March 7, 2018, entering the city accompanied by a long convoy of vehicles that had come out to welcome them. A press release was issued at Adana Fair Center, which also provided accommodation for the members that night. After spending the night in sleeping bags, the women woke up early in the morning to make it to the Syrian border.  They were joined by other women who had been arriving in Adana all night to join the convoy, thereby increasing the number of participants to about 7,500 women.

Vehicles from Turkey’s northern, eastern and southeastern cities moved in smaller convoys towards Hatay. Over 10,000 women arrived at Hatay’s central square on March 8, 2018, just in time for International Women’s Day, and they called upon the whole world to listen to their demands.

The “Silent Cry” declaration was read at the event, which was covered by numerous national and international media outlets.

Following the reading of the March 8 declaration, a call was made by Atty. Gülden Sönmez, the General Coordinator and spokesperson for the Convoy, for a Silent Cry demonstration. Many Syrian women from Turkish cities bordering Syria and from the refugee camps in these cities participated in the demonstration in Hatay. Among the Syrian women were former detainees who had experienced these prisons. 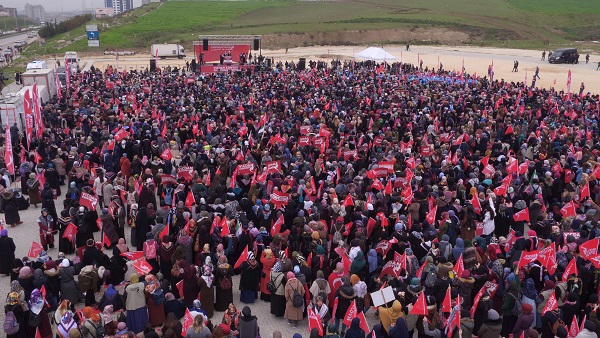 At Hatay Square, during their Silent Cry demonstration, women who had joined the Convoy of Conscience from Turkey and around the world took the scarves that they had worn around their necks throughout the journey and wrapped them around their wrists. Sitting silently for five minutes on the ground while handcuffed by their scarves, the women each acted as a representation of a Syrian woman held in the regime’s prisons, and called, on their behalf, upon all the decision-makers of the world, as well as the conscience of all humanity. They let out a silent cry asking for the liberation of the captive women of Syria.